We released v27 for Windows and Mac earlier this week. Perhaps the most important change has been to make it much easier to access your live broadcast recordings.

As you might already be aware, every broadcast you make is recorded to your hard drive so you can archive or share it later. We understand you might want to edit it before you share, so we’ve made it much easier to find your recording after you’ve finished every broadcast.

From your recordings window simply click “Show” on any item in the list, and Mixlr will open up the folder where the recording is located on your computer and even highlight the file for you. Magic? Not really, but still very awesome. Now you can take your recording, edit it, and put all those final touches on your broadcast before you upload it to your favourite services.

Maybe you want to trim, or make a short clip to share on social media. Perhaps you want to upload your live podcast episode to iTunes, put your last live gig on Soundcloud or last DJ set on Mixcloud. Or even share your awesome talk show on another platform, or simply archive it. It’s just that bit easier to get started with your recorded file once you’ve finished broadcasting. Just don’t forget to turn recording on before you start broadcasting!

A few extra things we’ve changed behind the scenes:

If you haven’t updated already, download the new version of the app for Windows or Mac and do get in touch if you have any feedback. 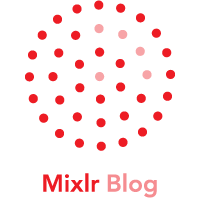